So what is all the fuss about?

Had enough? Go To The Challenge

On the 16th of October, 2014  Rob Sinnott posted his outlandish views on a very popular social media forum. Since that time many professionals and the public have been outraged at such outlandish and inaccurate claims. Soon after this, Matthew McCoy defended this by stating, "Dr. Sinnott offers a humorous, anatomically and physiologically correct discourse on Ebola and the role of the immune system, subluxation and chiropractic in such situations." How do you feel about this post? 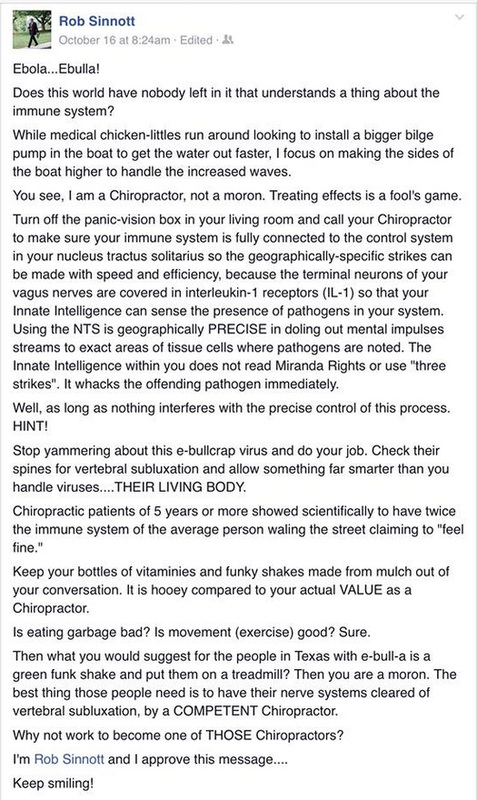 Dr Dave Newell, Director of Research at the AECC and long time chiropractic academic with over 25 years experience in the sciences and clinical research, felt the need to protest at such claims as those presented by Rob Sinnott. Dr Newell expressed his concerns regarding Sinnott's post in an email to the Annals of Vertebral Subluxation Research (AVSR), which is published by the Foundation for Vertebral Subluxation, where Sinnott is an advisory board member.

Dr Newell shared his correspondence to FVS with his students as part of their ongoing debate around evidence informed practice, a subject he teaches at the AECC. At the time AECC students were discussing issues arising from recent external speakers that had presented at the college under the invitation of one of the student clubs. He promised a number of them that he would pass on his correspondence with FVS as part of the ongoing debate around evidence informed practice.

The official defense of the public post by Rob Sinnott

Twenty-four hours after Dr Newell's correspondence to the FVS, their official response appeared on Matthew McCoy's website together with the original email Dr Newell had sent to his students.

Where to from now?

The creators of The Evidence Informed Chiropractic Challenge are mainstream chiropractors and chiropractic educators who feel inaccurate statements regarding our profession cannot be allowed to continue without challenge. We, along with many others, believe the silent majority of rational, professional committed and evidence informed chiropractors must make themselves heard. They must help the public distinguish between acceptable and mainstream scientific discussions and the unscientific, borderline incompetent views licensed professionals like Rob Sinnott, Matthew McCoy and their like espouse. We feel it is important to stand up publicly and counter such views.

Rob Sinnott, we do not agree with you. Your views represent a clear and present danger to the public and the profession. We will call you out, wherever and whenever you misrepresent chiropractors!
Click here for the Challenge